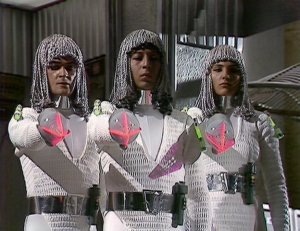 I really liked the Movellan costumes. I might have to make one for myself.

It’s actually been quite a while since I’ve watched a television episode I haven’t seen before. There are a few reasons for that. First, I’ve been concentrating on audios a bit, and they’re easier to consume while doing something else (usually playing Doctor Who: Legacy). Second, my husband, who isn’t all that interested in the audios, wants to watch the episodes with me, so episodes don’t get watched when it’s only me who’s available to watch. Third, just life in general has been getting in the way. However, we finally sat down to watch “Destiny of the Daleks”, which has been throttling our Netflix queue for about three months now.

“Destiny of the Daleks” is the first episode of Romana II’s run (that’s Lalla Ward), and features the infamous scene where she “tries on” different bodies before settling on one that she likes. This has sparked a lot of discussion about why the Doctor doesn’t get that luxury, that he has to settle for whatever body he happens to get. I think the consensus is that Romana chose to regenerate and was in a controlled environment, while the Doctor always dies to regenerate and usually isn’t at leisure when he does so, so he doesn’t get a choice.

This is a four-part story that we watched on two different nights, two parts at a time, and we almost felt like abandoning after the first two parts because they were so boring. I’ve stated before that this is the main weakness of the multi-part format of the classic series, that they had to fill a certain amount of time and usually did so by introducing long scenes of people and monsters wandering down corridors or picking their way across quarries. I’m sure we would have finished watching the episode, but it felt like the only reason we came back was because part two ended with Davros coming back to life.

Yes, that Davros. The first two parts had to do with the Doctor meeting up with a race of beings called the Movellans who landed on the planet looking for something. It turned out they had followed the Daleks here, and together, they discover that this is Skaro and the Daleks had come here looking for Davros, who had placed himself in suspended animation so that he could heal from his last appearance. There, see? I just told you everything you needed to know about the first two parts.

Well, except for one thing: the Doctor senses that the Movellans are not being forthright with him, and he’s right to suspect them. They are a race of robots who are at war with the Daleks, and the war is currently in a stalemate, so they came here to figure out what the Daleks were doing, guessing that the Daleks were fetching something that would give them the upper hand. Davros, of course. They capture the Doctor with the intention of using him as their upper hand, and they have an ace in the hole of a device which will destroy all life on the planet if they aren’t able to convince the Doctor to work for them. They reveal that like the Daleks, if they win the war, they plan to go on to conquer the rest of the universe. With the help of released Dalek slaves, the Doctor is able to break free and deactivate the Movellans, disarm the device, and capture Davros.

The second two parts of the episode are a lot better than the first two, only in part because the Doctor spends much of his time getting capture by one side or the other, then outwitting them and escaping, and then getting captured again. But far more interesting is the underlying theme to the episode, which is what happens when two absolutely logical races go to war with each other. The Doctor explains it using rock-paper-scissors: the Movellans are unable to defeat each other at that game because their moves are absolutely predictable, and similarly, neither the Movellans nor the Daleks may defeat the other because they are evenly matched and do not have the imagination to do something the other side can’t predict.

Now, this is what Dalek episodes are always all about: the Daleks always lose because the Doctor does something they don’t expect. This time, however, the failings of pure logic are laid bare, on both sides of the conflict. What’s also interesting is that the Movellans are not carbon-copies of the Daleks. The Daleks have a hierarchy, with the top Dalek (or Davros, once he wakes up) making the decisions and giving orders, while the Movellans make suggestions and the other individuals weigh their suggestions and choose the best course of action from it – two different methods of applying logic and order to the system. And in the end, both sides are defeated by the ones who can step outside rigid thinking.

The only thing that disappointed me in this episode was the characterization of Romana: she displays as much intellect as the Doctor, though she’s restrained, as she’s a much better Time Lord than he is, but she’s a bit too screamy for my tastes. I haven’t yet seen Romana I to compare, but I am very familiar with the mature Madame President Romana from the Gallifrey audios, and she has come quite a long way.

So there you have it, a fun, action-packed episode with interesting themes, punctuated by a lot of imperious yelling from Davros, which he does so well. And now I’m looking forward to the next Netflix delivery. No idea what that will be.