About six months ago, just before the 50th anniversary of Doctor Who, I wrote a post listing my fifteen favorite episodes to date. I’ve been thinking recently that my tastes have changed quite a bit since last year, after re-watching the modern series and catching up slowly on the classic series, so I thought I’d do that exercise again and see what’s changed. So, here’s my current list! I made sure to choose the episodes and write the summaries before re-reading the old list, so that I could see exactly how my attitudes have changed, and there are some very interesting differences. Interestingly, I found that I revised my definition of “favorite”: last time, it was “the shows I watch the most,” but this time it’s “the shows I enjoy the most.” I also  couldn’t pare down my list to just fifteen favorites and five honorable mentions, so this time the honorable mention list is a lot longer. Here goes.

15. The Unicorn and the Wasp

I really love this episode simply because it is light-hearted and fun. It is my current go-to for light popcorn fare.

Tying up the series 5 storyline, this episode is both temporally complex (I am really starting to hate the phrase “timey-wimey”) as well as suspenseful and engaging. The Pandorica speech is gorgeous, though it’s very sad that the aliens retreated not because the speech worked, but because they were feinting to lure the Doctor into the trap.

Best scene: Amy remembering the Doctor and bringing him back.

This is just a fun action episode, where we get to see the Doctor doing what he does best: figuring out the situation and saving the day. Martha discovering the Doctor is an added bonus – every time a new companion appears, we get to experience the Doctor anew through her eyes.

Best scene: The Doctor taking his tie off at Martha at the beginning of the episode, and subsequently going back to do so at the end of the episode.

Best scene: The Doctor confronting the Atraxi on the rooftop.

Following “The Waters of Mars,” this is the redemption of the corrupted, failed Doctor. It’s not a full redemption – he’s still very flawed – but he manages to overcome his inner demons and save the universe again, then sacrifice himself to save another person again. We also get to see the Time Lords at their lowest point.

Best scene: The Doctor survives the encounter with Rassilon and the Master, then hears Wilf knocking.

Best scene: This one is hard to select. I really liked the scene where the Italian neighbor leaves for the internment camp. It brings the horror of the world into focus.

9. Remembrance of the Daleks

The only classic episode in this list, but only because I’m limiting myself to fifteen. This episode demonstrates very clearly that the Seventh Doctor is very different from all of the ones who came before (and probably since). I’m not going to spoil it for you, but this episode had me watching with my mouth hanging open in astonishment when I figured out what was going on.

There’s so much going on this episode. Craig has to deal with this weird new roommate. The Doctor has to figure out what’s going on in the building and save Amy and the TARDIS, but he also spots the problem in Craig’s life and tries to fix it. All of it comes together wonderfully in the end. And, of course, there’s just a lot of zaniness throughout the show. 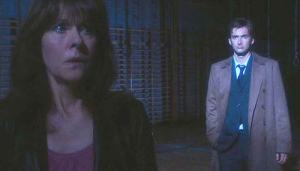 The return of Sarah Jane Smith. Need I say more? The school part of the story was a bit weak (though it did foreshadow the Doctor’s eventual failure), but the episode is really about Sarah Jane and the Doctor, and it’s just wonderful.

I have always loved the story of Jackson Lake. Miss Hartigan was also terrific, though I agree with RTD that he should have had her redeem herself by sending the Cyberking into the Void, rather than have the Doctor do it.

Best scene: The Doctor’s explanation of what happened to the new Doctor.

5. Silence in the Library/Forest of the Dead

The main story, about CAL and the library, is inventive and wonderfully crafted, but the secondary story, of River and the Doctor, is just as important. It gives you a tantalizing glimpse of the Doctor’s future with this enigmatic woman. 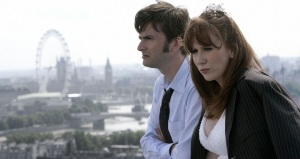 The non-stop action in this episode doesn’t cover up the deeper story, of Donna’s life and how the Doctor affects it. It wakes her up to the fact that there’s more out there than just working as a temp, and that she’s fully capable of facing it head on. Meanwhile, the Doctor, just coming off the loss of Rose, visibly starts to heal upon meeting up with Donna.

3. The Day of the Doctor

The story was fun, the final resolution was spectacular, and it set the stage for the next era of the Doctor’s life. The main themes (sacrificing the few for the many, the stasis cubes, “same software, difference face”) were woven very expertly through the episode. There’s not much more to say about this.

Best scene: The Tenth and Eleventh Doctors join the War Doctor to fire the Moment. I tear up at this scene every time.

The horror of an unknown and unknowable adversary and the horrible things that humans in abject terror, in a mob mentality, can do – that’s what “Midnight” is. This episode would have been nothing without the perfect performances of Mr. Tennant and Lesley Sharp as Sky.

Best scene: There’s really no way to separate out any scene in the main part of this episode. There are no breaks here, which is part of its brilliance.

This is simply the best story of all time. It explores what it means to be human and what it means to be a Time Lord, while also tying in themes of the transience of life and the horrors of war. It also emphasizes the decisions and sacrifices the Doctor must make while he does what he does. Should he have tried to be kind to the Family by not destroying them outright and giving them the chance to live out their normal lifespans? Look at the death that his compassion caused. Are we fit to judge, weighing the deaths of humans vs. the deaths of aliens?

Best scene: The Doctor returns to talk to Joan. It reminds us of something we often forget: the Doctor is alien, and not remotely human.

Honorable Mentions (in no particular order) 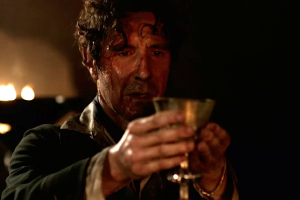 The Girl in the Fireplace: A beautiful story. The only reason why it’s not in my top fifteen is because I never remember it because it’s part of Rose’s season – I seriously ignore that season when I’m looking for something fun to watch. Ok, enough Rose-bashing for now.

The Fires of Pompeii: This episode addresses the difficulties the Doctor has in deciding whether or not he’s going to interfere with events, and demonstrates that Donna is completely willing to oppose the Doctor when she feels she’s right.

42: For some reason, I really love stories in which the Doctor must deal with a psychic attack, and in this case, he loses. The pacing of the threat in this episode is relentless (Graeme Harper is really good at atmosphere and pacing). For once, the Doctor admits he’s scared, and the reason for it – not that he’s afraid for himself getting taken over or dying, but that he’s afraid he’s going to kill everyone – is just so the Doctor.

The Doctor’s Wife: I’m not sure why I don’t have this in my top fifteen; I expect the next time I do this, it’ll be there. The emergence of the living TARDIS is just wonderful.

The Christmas Invasion: This episode gives a glimpse of how lost humans would be without the Doctor and defines the new Doctor completely, from his gob, to his courage, to his cruelty when he’s pushed too far.

The Face of Evil: The warriors of the Sevateem tribe are well-characterized, and Neva’s development is particularly fascinating. The Doctor’s involvement in the history of the tribe is very interesting.

The Caves of Androzani: This episode is extremely complex, with story threads of greed, despair, beauty, obsession, and sacrifice woven together. This is the Doctor at his best: his most heroic and his most tragic. Why isn’t this in the top fifteen? Mostly because I don’t understand it as well as I’d like to, but I do love it.

Dalek: The Ninth Doctor at his worst and Rose at her best. This is where the Doctor turns his downward spiral around and he starts to heal from the Time War.

The Waters of Mars: The Tenth Doctor at his worst. He has the best of intentions – he wants to save the lives of people in front of him – but watching him give in to the temptation of power and turn his back on the laws that were created to prevent that is heartrending.

The Five Doctors: Ok, the story in this episode is pretty much rubbish until the final scenes in Rassilon’s tomb, but the ride is incredibly fun, with a mash-up of as many Doctors and companions as they could fit in.

The Ark in Space: I really can’t remember why I liked this episode. I just remember that I sat down expecting it would be just another show filled with bubble-wrap monsters, and just being blown away by it. When people ask what the best classic episode is, this is the one that comes to mind, but I have no idea why!

Blink: This episode has one of the most clever and well-executed plots in Doctor Who. At first watching, it was marred by the improbability of the enemies (entities that get frozen if anything looks at them; how does something like this even start to exist?), but I could suspend my disbelief for it. Then subsequent appearances of the Weeping Angels destroyed their credibility so much that it’s hard for me to take this episode seriously anymore. I still love the plot and the excellent direction and camerawork, and that’s why it’s in this list.

Black Orchid: I really love this episode because it is just different. There’ s no alien threat, and the TARDIS crew get to enjoy themselves for a while. Though its plot is a bit thin, it’s a refreshing breather from the usual “beat the aliens” serial, and it’s just fun.