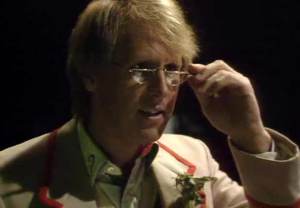 Unrelated image because I didn’t want to post a pic of the game box. But it’s appropriate, as the Doctor looks a bit clever here.

Over the weekend, we purchased the Trivial Pursuit: Doctor Who Edition game (from Hot Topic, which had it on sale, but the link here is for Amazon). I had seen it online, but wasn’t sure I wanted to get it. You see, I love trivia games (I even played on my school’s College Bowl team in college and grad school) and it takes a certain level of quality of trivia to attract me. If the game is about a specific subject, the questions need to go deep into the subject. For Doctor Who, I would only purchase a trivia game if it covers both the classic and modern shows. Luckily, the sample card on the box (something you don’t see in the online images) showed that the game does cover the classic show, and we bought it. We played it last night, and we enjoyed it immensely.

The game itself is supposed to be played like this. On your turn, you roll the die to determine which category of question is read from the card. If you answer the question correctly, you roll the die again to be asked another question. This time, if you answer the question correctly, you keep the card. Then repeat; basically, if you keep answering correctly, you keep a card every two questions. If, at any point, you answer a question incorrectly, your turn is over and the next player goes. The player who collects six cards wins. Now, this was too complicated for us, because we just wanted to answer trivia questions, so we played it like this. The active player collects the card for each correctly answered question until he/she answers wrong, at which point the next player goes. When all the cards are collected, whoever has more wins. That was perfectly fine by us. (And yes, I won, 61 to 39.)

There are six categories on the cards, like “Time Lords” and “Companions,” but we didn’t pay much attention to them, as we simply referred to them by their colors. There also seemed to be some category mismatch (“Shouldn’t this question about Clara be under ‘Companions’ and not ‘Time Lords’?”). However, in general, the questions were well-written, and they gave multiple choice options for some of the harder ones. They were weighted towards the modern show, which was to be expected, as sales would tank if the game was more about the classic show, but there were plenty of classic questions to be had. We found that the blue category (“Time Lords”) was overall the easiest, probably because most of the questions were about the Doctor or the Master. Purple (something about “Dates”) was pretty difficult, because it often asked about real-world things that are related to in-show events. The worst category, at least for this American couple, was orange, which was named something like “Cast and Crew.” A large number of the orange questions were about Doctor Who guest actors and what other shows they appeared or starred in – very difficult for us, who have very little knowledge of British shows.

All in all, though, we had a great time, and trivia questions are great for reliving the show in your mind. Of course, it’s not a game you can play often, because if you play too much, you’ll simply memorize all of the answers, but at $20, I think it was definitely worth it. I do wish we had more fan friends to play it with (so I can dominate them all! Muahahaha!).