I read an article this weekend that discussed an issue that the early Doctor Who showrunners had to deal with, the propriety of having a woman traveling alone with a man. It’s something that we don’t even think about nowadays. We had no problems with Rose, a 19-year-old girl, running off with the Doctor, who looked to be in his forties. Of course, early on in series one, there was no indication of a romantic relationship between the two characters, and by the end of series 1, we were comfortable with the two characters traveling together, so it wasn’t an issue. But back in 1963, this would have raised eyebrows. Considering that Doctor Who was considered a children’s show, that kind of thing was forbidden. 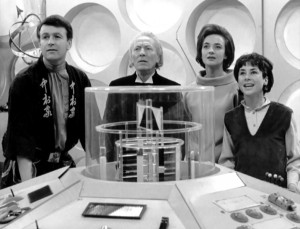 Susan and her chaperones

When the show was first conceived, Susan was created as a teenager but wasn’t the Doctor’s granddaughter, and even with the presence of Ian Chesterton and Barbara Wright in the TARDIS to act as chaperones, the propriety was questionable enough that they changed the character to be his granddaughter. This way, no one could suggest that there was anything going on between the Doctor and his young companion. Of course, it worked out well for the show, since the familial relationship between the Doctor and Susan was such a big part of the show’s early days.

Since the article made me wonder how well they kept to this ideal, I plotted out the tenures of all of the companions to see how they overlapped, and someday I’ll convert it into an image to show it all comes out. But in the meantime, I’ll point out a few salient points.  Throughout the entire classic series, the Doctor has at least one female companion at all times, except during the Fourth Doctor episode “The Deadly Assassin,” which is set between the departure of Sarah Jane Smith and the arrival of Leela. Throughout the tenures of the First and Second Doctors, there was always at least one other male in the TARDIS with the Doctor and his female companion: first Ian and Barbara, then Steven Taylor, then Ben Jackson, and finally Jamie McCrimmon.

The Third Doctor never had a male companion: Liz Shaw, then Jo Grant, then Sarah Jane all were his sole companion, though Brigadier Lethbridge-Stewart, and to a lesser extent Sergeant Benton and Captain Yates, also appeared during much of these episodes. I think that the reason the women were allowed to be alone here was that for much of the Third Doctor’s tenure, he was trapped on Earth and wasn’t actually traveling. Thus, though the women were companions, they didn’t live in the TARDIS and therefore didn’t live with the Doctor. By the time the Doctor gets his TARDIS back, two years had passed and the concept of the Doctor having a platonic relationship with a single companion was acceptable enough.

When the Fourth Doctor appeared, Sarah Jane had a chaperone in Harry Sullivan, but he left at the beginning of season 13, and from then on, the Doctor wasn’t forced to take on extra companions. Sarah Jane, Leela, and Romana didn’t have a chaperone for most of their time (I don’t consider K-9 to be an appropriate chaperone). The Fifth Doctor’s run gets a little interesting. For the first time since the Second Doctor, the Doctor had a full TARDIS – three companions – for almost two seasons (again, I’m not counting Kamelion because though he’s technically in the TARDIS and rounding out that third spot, he really only acts like a full companion in his first and last episodes). I know that it’s been mentioned that Peter Davison was forbidden from putting his arm around Nyssa’s or Tegan’s shoulders specifically to prevent people from thinking that the Doctor might have any familiarity with them, so the propriety ideal is still there. However, Peri was then introduced specifically for her sex appeal. Very interesting dichotomy of thought there.

From Peri on through Ace, the Doctor always only had one companion, so again it was ok for the Doctor to be traveling with a single female. And of course, in the new series, that’s not even an issue anymore – the issue of the Doctor’s relationship with his companion(s) is now dealt with through the story, rather than ignored, which is probably what caused the problem in the first place. If the show doesn’t tell the audience what’s happening, that’s when they start making up their own theories about it.