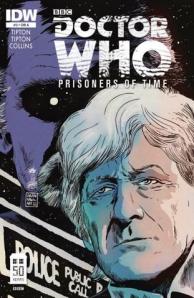 A comic cover from the series

I received my hardback copy of the graphic novel Prisoners of Time yesterday, and spent a good part of the early evening reading it. It’s a good comic, and I would definitely recommend this graphic novel to any Doctor Who fan (though not as much as I would recommend The Forgotten).

Spoilers ahead! (Maybe – I don’t really think I’m spoiling anything.)

First, if you’re put off by the $34 price on Amazon, you should know that it’s a compilation of twelve comic books and it comes in a very well-bound hardcover printing. Each of the first ten issues is an adventure of the first ten Doctors. Then, at the end of each adventure, a mysterious figure appears and kidnaps the Doctor’s companion, and that’s the overarching plot: who is this person, and why is he doing it? The eleventh issue brings the Eleventh Doctor into the story, and it and the twelfth issue are the resolution to the series.

In my opinion, the strength of the series is the set of Doctors’ adventures. Each one fills the entire issue, so you basically have a nice long story to see each Doctor. Each story is crafted carefully to match the feel and character of its Doctor. For example, the First Doctor’s story is an historical tale, the Third Doctor’s story has a lot of action, the Fifth Doctor’s story is a moral tale, and the Tenth Doctor’s story has quite a lot of running and dodging. In general, the art was excellent (here’s a link to the line drawings of my favorite page), except for the Eighth Doctor’s story, which had absolutely terrible art. It actually bugged me quite a lot, since the Eighth Doctor really didn’t get a fair shake on television, and here he got the short end of the stick again (though his story was just fine).

Oh, and the first three pages of the Tenth Doctor’s story brought a tear to my eye.

The overarching story, unfortunately, wasn’t the best. The villain really wasn’t very believable and required a number of pages of exposition to explain why he was doing what he was doing. (Perhaps, if they had shown a little bit of the exposition at each of the kidnappings, it would have been better, as the reader would have had the chance to try to figure out who he was.) The resolution of the story was a lot of fun, so that made up for the unsatisfying villain. The other unfortunate part of the series is that with the eleventh issue being part of the resolution, the Eleventh Doctor didn’t get his own adventure. In addition, because his entire purpose was to confront the villain, he wasn’t given his usual sparkling, schizophrenic dialogue, and the art did not convey the energetic, manic movements that define his character. He was the only Doctor that wasn’t written well.

In comparison, let’s look at The Forgotten. In that graphic novel, which, to be honest, is a lot shorter, each Doctor got an adventure, but they were each only a few pages long, with the story between the adventures about the Tenth Doctor trying to figure out what’s going on. The adventures were all well-crafted and suited to their Doctors, and then the overarching story was engaging. The villain himself was a bit contrived, but fit very well with the setting of the story (surprisingly, considering the difficulties the author had in rewriting the story, as the Tenth Doctor’s story in the TV show changed over the course of the comic series’ publication and he had to reconstruct the story to match). The actual confrontation with the villain and resolution were actually somewhat similar to Prisoners of Time, but less chaotic and more personal.

In general, The Forgotten did much the same thing as Prisoners of Time, but better; however, I think that if you read Prisoners of Time for the adventure stories and don’t worry about the entire plot, you’ll enjoy it a lot. Thus, I definitely recommend this graphic novel.